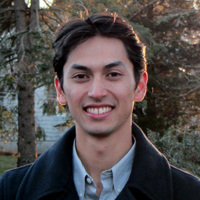 R. Kikuo Johnson grew up in Hawaii on the island of Maui. For generations, native Hawaiians have told tales of the shape-shifting shark god Kamohoalii; The Shark King is the artist’s version of one such tale about the insatiable appetite of Kamohoalii’s son, Nanaue. Kikuo’s 2005 graphic novel, Night Fisher—also set in Hawaii—earned him both the Russ Manning Most Promising Newcomer Award and a Harvey Award.

Kikuo spent his childhood exploring the rocky shore in front of his grandmother’s house at low tide and diving with his older brother. Since moving to the mainland, Kikuo has discovered the joys of swimming in fresh water and currently lives in Brooklyn, New York, where he enjoys cooking, playing his ukulele, and riding his bike all over the city.
TOON Blog