About the Author of Benny and Penny in Just Pretend 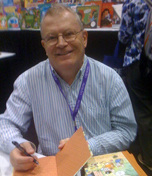 Geoffrey Hayes has written and illustrated over forty children’s books, including the extremely popular series of Otto and Uncle Tooth Mystery Readers (over a million copies sold), the classic Bear By Himself, the Patrick Bear books, and many beginning reader adventures. He also illustrated Margaret Wise Brown’s When the Wind Blew. He currently lives in New York City.

Geoffrey Hayes has been writing and drawing children’s books since the 1976 publication of his classic debut book, Bear By Himself. Born and raised in San Francisco, Geoffrey grew up playing, reading and drawing with his younger brother Rory Hayes, who went on to become an acclaimed underground cartoonist. Working in a shocking primitivist style, Rory counted among his fans such illustrious colleagues as Robert Crumb and Art Spiegelman before succumbing to his own demons and passing away at the untimely age of 34 in 1983. Geoffrey pursued a gentler course, shepherding his childhood-connected characters through the formats and fortunes of children’s book publishing and now returns to his childhood love of comics with Benny and Penny, the debut title in the new TOON Books collection of hardcover comics for early readers.

Geoffrey Hayes: Rory and I started drawing together when Rory was maybe seven and I was nine, and we used to draw books for each other and write stories for one another. And of course I had tons of comic books. This was the nineteen-fifties, and there were so many comic books available then.

Bill Kartalopoulos: Did you go to art school after high school?

GH: Yeah, I did. I moved to New York after high school. I went to Hunter College, and I was also trying to get published. Rory followed me a little later and we lived together in New York for about a year and a half, and then he didn’t really fit in with New York. So he ended up going back to San Francisco, and that’s when he got involved in the underground comic scene.

BK: And how did you finally break into children’s books?

GH: It wasn’t until I was 26 or 27 and I had been working at a Japanese architect’s firm doing drafting and interior design, and I got laid off with a lot of other people. So I thought that would be a good time to beef up my portfolio, which I did, and then I started taking it around to various publishers. And a lot of editors or art directors were very interested, but nobody really gave me a concrete response until I went to Harper and I met Edite Kroll. She not only liked my work, but she was determined to get a book out of me. So we worked together until I did my first book, which was called Bear By Himself.

BK: And what did you follow that up with?

GH: My second one, which actually got better reviews than my first one, was a novel called The Alligator and His Uncle Tooth. And at that time I also illustrated a book by Margaret Wise Brown called When the Wind Blew, and that got a prize from the New York Times as one of the ten best illustrated books of the year.

BK: So there was a moment in the seventies then when you and your brother would have had work in print at around the same time. Were you responding to one another’s work?

GH: Oh yeah, definitely, he would always send me copies of the magazines he was getting published in, and I certainly sent him copies of my books. In fact my first book, Bear By Himself, was based on a drawing that Rory had done of a teddy bear sitting on a hill which he named “Bear By Himself.” So there was a lot of interchange between us.

BK: What were your next few books after that?

GH: I did some follow-ups with my main character Patrick who was in Bear By Himself as a series of four little hardcover books that I’m very proud of. And then a few years after that I signed a ten book contract with Random House. I did a lot of books with my own characters, but in series that they had initiated themselves. MyOtto and Uncle Tooth books I did as a series of Easy Readers, and those have done tremendously well. And I did some Patrick books with them, but I don’t think they were very successful. Part of that was because I was trying to adhere to what worked in their series and they were mass market, so it wasn’t the same as doing something more personal.

BK: When Françoise Mouly got in touch with you about working on a TOON Book, was Benny and Penny something you had already thought of?

GH: Yes, I had sent Françoise some of my portfolio pieces. And one of them was the story of these two little mice. And when we decided on what the first book would be I thought, “Well, maybe it would just be simpler to do them.” And she thought that was a good idea. I just reworked it so it changed slightly, but it’s basically the same plot.

BK: But the way you had it was in comics form originally?

GH: Yeah, it was a comic. I realized a few years ago that comics have always been my first love. But even though I love comics I didn’t really want to do draw superheroes. That’s just not my kind of style of drawing. My stuff has always skewed younger, and there just really wasn’t any place for that. And then I just said, “Oh, the hell with it, this is what I like to do.” So I’ve been working quite steadily, just getting down a lot of ideas that have been rumbling in my brain for years, and most of them are comic stories. And now of course it’s starting, where there are comics for kids again.
TOON Blog